I finally got the spring fertilizer down (4000 sq. ft. coverage was just enough), sans the moisture I was hoping for.  Although, I do believe there has been some over-night humidity going on, because the grass is starting to green up on its own.  Also, most of my perennials and biennials are shooting up beneath the leaves that I left in the flower beds last Fall. I managed to fill my entire dumpster up with old grass clippings and leaves, so now I expect the lawn to green up by Easter (April 1st) or so. There should also be some moisture between now and then. I probably won't turn on the outside-water until night-time temperatures are above freezing.

Here are some of my Spring "shoots:" 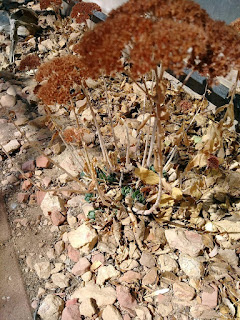 This is a succulent, although I don't know the name.  I like to leave the dried flowers over the winter because I think they look nice, and I think they protect the new shoots during the spring snowstorms.  I think the danger has passed, though, because temperatures have been so warm (50's - 70's daytime) this spring, so I went ahead and pruned the dead shoots yesterday. 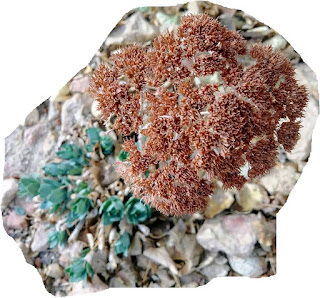 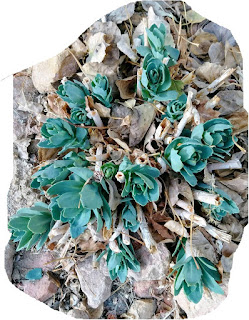 My Pansies have been trying to make an appearance for a couple of weeks now.  Here's the first one that made it through single-digit night-time temperatures, peeking through. 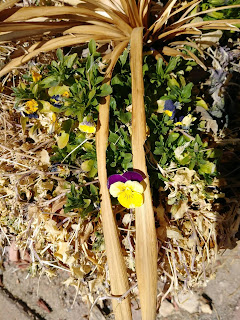 Here are  my trimmed Pansies.  They multipied over the weekend - I'll add more later as they come in, to either Walmart, Lowes, Home Depot, and Kmart.  They all carry those great Bonnie Plants. I found the Dracena and a couple of the Pansies at a local nursery called Campbell's. I removed the Purple Dracena from the middle of the pot. Although beautiful, it didn't fare well with the grasshoppers last summer, so I think I'll try a different "center " plant this year.  I think I'll try to find a single Daisy plant - grasshoppers don't bother Daisies, either.  Surprisingly, the grasshoppers didn't touch any of the Pansies, and they even did well in the hot south-facing location against the stuccoed house, as long as I watered well every day, June through September. (And by "well," I mean a full gallon of water in each flower pot, sometimes twice a day on 100-degree-plus days.) 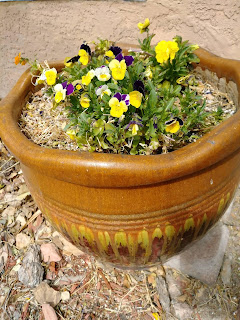 Here it is last Spring

Here's a Vinca, and the first ladybug I've seen this spring.
It's pretty warm around the flower pot, I think. 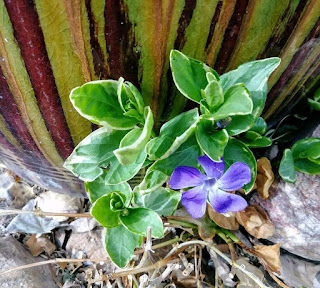 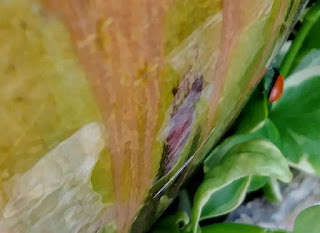 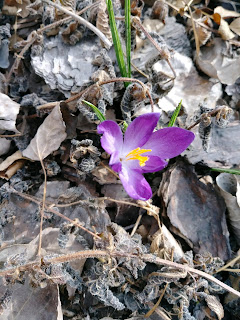 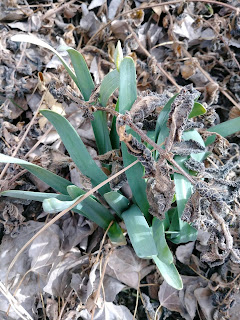