There was a windstorm this morning, and I counted 31 crabgrass seed pods that must have rolled into my yard from the nearby prairie, and my neighbors' yards.
I picked them up as carefully as possible, since each one is full of fresh seeds, and put them in a pile so I could photograph them. 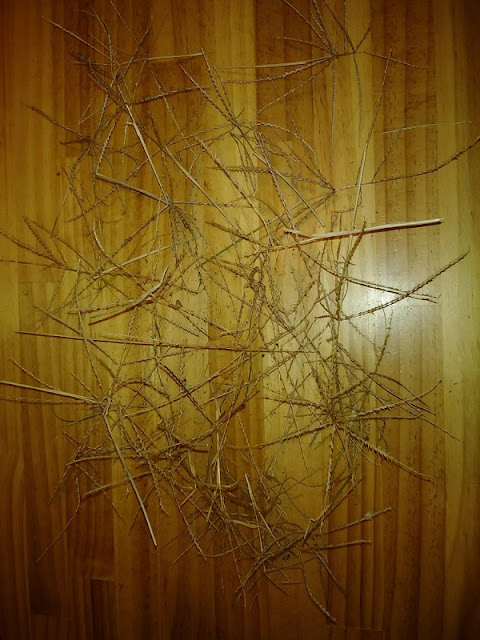 These are the innocent-looking little buggers that I have been battling since last Spring.  I previously, finally, grasped the fact that half of my lawn was crabgrass.  I say, "was," because, as I mentioned in my previous blogs, I applied a crabgrass deterrent to my lawn last February, when the weather people and weather apps all predicted  an early warm-up, and one or two Spring rain or snow storms.  We got the early warm-up, but very little snow or rain.

When I finally did water my lawn, after "last frost," it came out of dormancy fairly fast. At first I was sure that the reason only half of my lawn was "greening up," was because I hadn't watered soon enough. I continued to water, hoping to see some more greenness, when I started to study pictures of dead crabgrass in gardening books, and in online articles.  Slowly, I had to admit that my lawn was full of crabgrass, and I was in for a lot of work if I wanted to save it.

I started to dig up the dead crabgrass, which was patches of crabgrass thatch, and decided to re-seed with some bluegrass seed that was similar to what is there, and  that was supposed to grow in both sunny and shady spots. However, by that time,  outdoor temperatures were too hot to try to keep the seedlings from drying out, so I decided to just water and mow the grass that did green up, even though some of it is admittedly crabgrass, and wait until September to start my new grass.

I ordered some Scott's Bluegrass seed mix at Walmart, and picked it up postage free at the store, so I'd have it on hand when the time came to add some soil (I lost some soil when I de-thatched) and plant my grass seed. I also kept my eye out for alternatives, and did some research on the keywords: 'grasses that choke out crabgrass.'

I have to say I was really happy when I found some information online that Zoysia grass chokes out crabgrass!  Not only that, I found an online company that would ship my Zoysia sod (that I planned to cut into 1inch by 1inch "plugs") to my home. One of the products that I also plan to try this fall, is a liquid thatch remover that claims to turn thatch into rich, organic soil, in two to three months. If it works, it will save me a lot of work replacing the two inches of soil that pulling and raking has been taking. The company also has a liquid fertilizer that I will try on my lawn, shrubs, flowers and garden in the spring, that looks promising.

My Zoysia sod and "step-on plugger tool" arrived in three days, and I bought some lawn soil to use with it in the areas where I'd had to dig up the crabgrass thatch. I only purchased enough to plant 300 plugs, to test them first. 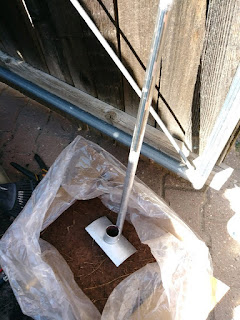 The pieces measured correctly, but I wasn't able to get a full 300 plugs out of the two sod panels, as suggested by the company. That's okay - I think I got about 100, which was enough for my main yard, spaced 12 inches apart or so. 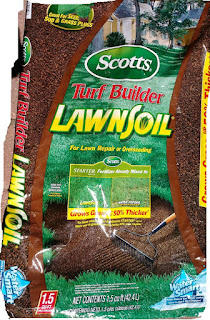 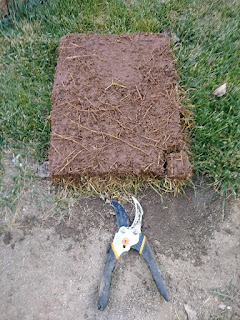 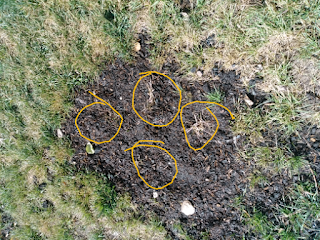 The company recommends that the Zoysia grass plugs are watered for 15 minutes each day, and that has been the most challenging part, really. I have followed directions, though; the plugs seem to be "taking," and the rest of my grass is greening up nicely. The company says that after the Zoysia grass is established, it doesn't need further watering, and will spread underground via rhizomes. I guess that's why it's able to choke out crabgrass. I'll go ahead and water until first-frost, though, because the rest of the lawn isn't Zoysia grass, yet. 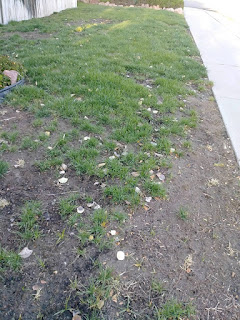 Grass is greening up again

I plan to spray the Liquid Thatch Remover on the rest of my lawn this Fall, so it will be ready to replace with Zoysia plugs next spring. I'll wait until spring to treat the areas where I planted the plugs, at the advice of the company. Here's a less-watered part of my yard. 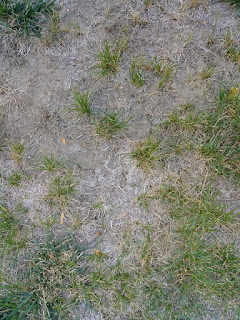 Crabgrass thatch
I'm just watering it enough to keep it alive, for now, since it needs so much work. I'm hoping the Liquid Thatch Remover will turn the bare patches into fertilized soil. Also, next year when I have the Zoysia plugs established, watering won't be as much of an issue, since Zoysia grass is almost self-sustaining, according to the company.

One problem I've had with the lawn soil is that it is growing a bumper crop of spur weed.  I have to scrape it off every few days before it takes hold.  It grows really fast, especially with so much watering. 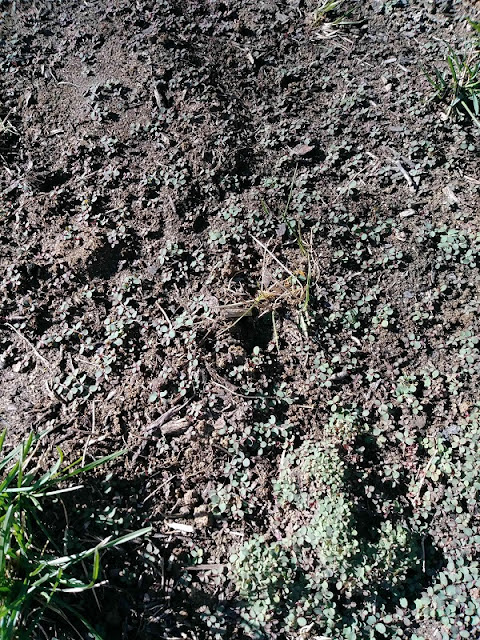 It's Been a Busy Summer

My Zinnias have been very "showy," and I have had a few really beautiful rose blooms. However, with the hot summer weather (we met or broke a few temperatures that were set in the 50's) it has been a challenge to grow pansies like the previous two years, especially on the south side of the house. 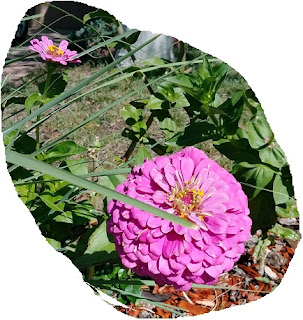 Here are my in-ground zinnias 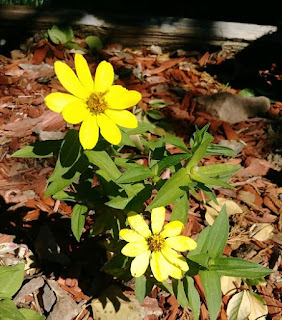 My container zinnias and daisies have been challenged, to say the least. 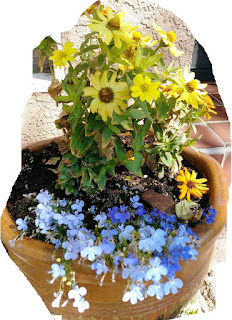 My pansies faded early on, and I had to buy some 4-packs of daisies, at Walmart, to fill in.

This rose bush never disappoints - the rosebuds and blooms are always stunning. 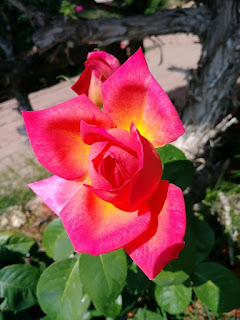 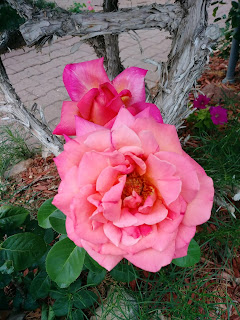